A mixture of strength of character, rejection of injustice, and steadfast belief in the duty to convey the truth, as well as love of adventure, have led Sidra Muhammad to become the first and only female media activist in Eastern Ghouta, a conservative environment that does not appreciate women’s public activity.

She is a resident of the second largest stronghold of Syrian deserters, only kilometers away from Assad’s palace. A few years ago, this area was a hub for peaceful demonstration, where people from different parts of the Ghouta gathered and protested. The area is now deafened with the roars of bullet, artillery shells and missile batteries, all throughout the day and night. The residents awake to the thundering of aircraft every morning, amid a protracted siege and prolonged starvation with occasional instances of gas attacks, as well as days of continuous infighting. Throughout these dire times, Sidra has maintained Skype appearances on TV channels and radio stations, relaying to the world the suffering of her people.

The Daughter of Besieged Eastern Ghouta

Sidra Muhammad currently directs the Women’s Affairs Office of the Syrian General Assembly of Free Syrian Citizens in Eastern Ghouta. She is also a correspondent for Radio Fresh, and has reported for a number of media outlets, including Sawt Dimashq FM, Ana Press news agency, and several TV channels where she has appeared to report on developments in Damascus and its countryside – such as Orient TV and Syria Al-Ghad TV.

When asked about the beginnings of her media career and her primary motivations behind it, Sidra responded: “When the revolution was sparked, and peaceful demonstrators were subsequently targeted by the regime brutality, by murder and arbitrary detention, I sensed a responsibility towards this popular uprising. I thought about how I could convey to the world the truth about what is happening – with honesty and integrity. I began working on filming and writing breaking news reports. Then I soon began appearing on TV channels and radio stations via Skype.”

“My first televised appearance was on Syria Al-Ghad channel in early 2012. I felt confused and perturbed at the time, but my belief in the gravity of what I was doing, and what I strived for, gave me the strength and determination to press ahead. Matters were getting ever more entangled, and conditions were worsening each day, and thus I had to shed light on the reality of the situation.”

Sidra has presented to the world news of the peaceful demonstrations and, later, the continuous brutality perpetrated against the cities and towns of Eastern Ghouta, notably the siege suffered by its people. She focuses on humanitarian angles in her coverage. Her aim is to deliver the truth honestly, giving little to no consideration to financial returns or other personal gains. The most painful aspect to her, as she expressed it, has been the horrifying spectacle of an outside world, silently watching an increasingly vicious regime gassing and starving women and children.

Sidra has toiled to develop her own method and present her stories in a professional manner. Drawing on accumulated experience, she has managed to refine her talents and depart from improvisation and spontaneity, refusing to remain an amateur citizen reporter. After a few years of restricting herself to filming and writing breaking news, she began to make appearances on the media via Skype. Her televised news contributions grew more robust and clear. Her experience helped her overcome many obstacles, and learn more about the techniques and principles of journalism. Notably, she developed deeper understanding and sensitivity towards those who are affected, taking into account their own sentiments – principally their right not to be featured or filmed.

“They Filmed Time and Time Again”

In a conservative community that frowns upon women’s work, especially in the media, the support and encouragement Sidra had received from her husband, especially his faith in the Syrian cause and in the role of women, have been critical in her overcoming the hardships of her work. She particularly emphasized the hazard of bombing, sniping and arrest during her coverage, in addition to people’s refusal to appear on film, some of whom even questioning the purpose and utility of journalism, especially when massacres take place and people are both outraged and horrified.

Sidra told Zaitoun about her targeting with sniper fire during her coverage of the clashes on the outskirts of Ghouta. Of the many incidents in which people express doubts about media or refuse to articulate their take on current events, she recalled an instance when a victim of shelling said to her: “They have filmed time and time again, and yet nothing materialized. Don’t film… You’re only filming to get paid.”

However, the difficulties are not limited to shelling, sniper fire or people’s skepticism. Other logistical considerations such as power outages, weak internet connections, and the lack of other means of communication, have posed serious challenges to Sidra’s work.

“We suffer a lot from weak network connections and their deliberate cuts by the regime,” she explained. “It takes us many hours to secure the connection using Wi-Fi extenders, and even more primitive means, so that we could resume our work. I cannot begin to recount the instances in which I had to climb onto my roof to fix the connection.”

Because the mission of the press and the media is to present and explain reality, the only female media activist in the Eastern Ghouta stressed that she never shied away from the people and their daily concerns, always opting to stay close to them and sense their sorrows, giving particular weight to children and the suffering that consumes their innocence. This has prompted her to participate in organizing several festivities and activities aimed at alleviating as much tension from the children as possible.

Additionally, Sidra considers women to be the second most affected segment by the war, following children, given the violations and abuses they have suffered. “However,” she noted, “women are still able to be what they want to be, because they have the sensitivity to be successful journalists who convey the reality truthfully and transparently despite the hardships they may encounter. While everyone hides in shelters to avoid bombardment, women journalists leave their families and head to the scene.”

Asked about the reasons for her success, Sidra pointed out that “Working on the ground and following what is happening moment by moment, and adhering to the principles of credibility, respect for people’s common sense, and avoiding the temptation of bias, and, first and foremost, having faith in the mission of journalism, are factors which have led me to persevere; even if I wouldn’t say succeed.”

After her son was arrested, she had to travel several times to a neighboring Arab country, but she always returned to Ghouta with all the more tenacity and fortitude. “Something inside me used to shout ‘freedom’,” as she put it.

Despite Sidra’s fondness for adventure, she has averted risking the safety of her relatives who reside in regime-controlled areas, and has been cautious as not to reveal any personal information that might cause any harm to befall them.

A Message to the World on Press Day

Sidra Muhammad is the pseudonym of the only female media activist in Eastern Ghouta. On World Press Freedom Day, she wished to address the world through Zaitoun: “This work is a grave responsibility; and the media has a message. We have an obligation to spread the truth of the suffering of an entire population, be them the detained or the displaced, those beleaguered along the borders or in refugee camps, or those besieged – as is our case. I wish that everyone disseminate the news of what is happening in Syria, especially in Eastern Ghouta. For if Ghouta were to fall –God forbid– then so would the revolution.” 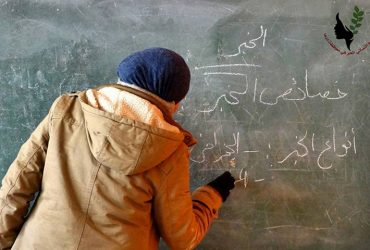 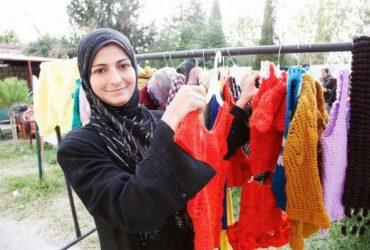 Next Article   Political empowerment not a priority for Syrian refugee women