“A sister of men” is the expression often used to describe girls and women working in citizen-journalism in the liberated Syrian areas.

While not belittling or degrading itself, this description rather refers to the hardships of such work under such security and societal conditions in Syria. It does, however, overlook many personal aspects to the lives of Syrian female media activists.

Not only do these female activists in the liberated areas risk their lives on a regular basis, but they also practice their profession at the expense of their personal lives, often abandoning the “privileges” enjoyed by other female journalists around the world.

Most unmarried Syrian women journalists in the liberated areas suffer from a negative perception towards their work, which often diminishes their marriage prospects. Furthermore, it puts them at risk of confrontation with their parents, who become a source of pressure on their daughters to abandon journalism.

Mirna Hassan, a young journalist who works in Idlib, noted that many young men, however respectful they may be towards female journalists and their work, would not prefer to marry a journalist.

This is particularly relevant to the conservative character of certain Syrian communities, which are critical of any work that requires girls to “socialize with men.” Mirna points out that journalism is not among the vocations readily accepted by everyone around her, since it requires that she frequently leave her home.

Many men had proposed to Judy Arsh, a reporter for Enab Baladi who is based in Al-Wa’r neighborhood in Homs, before she married a colleague of hers. Leading up to her engagement, she had always been given a choice between suitors and her work, and she always opted to pursue her career instead.

“Today I am engaged to my colleague,” said Judy, “which made me say yes, since he is respectful and supportive, and shares with me all my moments throughout.”

The Place Determines the Style of Dress

Most women who practice journalism in the liberated areas report on the events in their region. Since they are partly the product of their social environment, the form their news coverage takes is often compatible with the norms of their respective communities.

This does not, however, mean that these women do not have to make “compromises” that may fall under “adaptation,” such as wearing certain garments in certain locations.

Whereas it is rare to find an unveiled female journalist in opposition-controlled areas, women journalists happen to be forced to wear the niqab in compliance with particular environments.

Sonia Ali, a female journalist who is active in Idlib and has been published in many media outlet, said that she only wears the niqab when she needs to conduct interviews with rebel faction fighters.

Appearances Are Not Essential

Syrian women journalists often go about their coverage of the liberated areas in the form of written reports. Most of them refrain from appearing on camera for various social and security-related considerations, which absolves them from buying certain clothes for their media appearances.

Judy Arsh views that, given that a majority of the coverage is related to bombardment and daily concerns, attention to outward appearances is rendered a secondary matter for journalists.

“We do not have to consider personnel matters such as attire,” Arsh added, “especially in breaking news following massacres and bombardment. Sadness visibly overwhelms you, even without you noticing, and this puts to rest concerns we ordinarily would otherwise have, but do not in such moments.”

As for Mirna Hassan, she said that her attention to her appearance is part of her daily life. It concerns her personality, and not only her work. This does not mean designating certain wardrobe items for work, however.

These materials are published within the World Press Freedom Day campaign, in cooperation with ASML/Syria

Previous Article !After the Strike of Rozana Radio…No Good at the Horizon 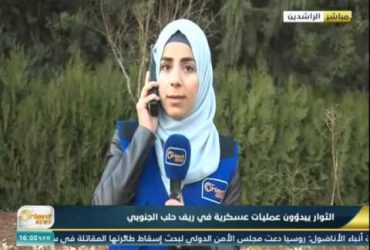 Next Article   Women in Syrian Media: Challenges and Achievements